Will and I got married April 24th 2015, we knew we didn’t want to start a family right away. We wanted to spend some time married and to ourselves before adding a tiny little human we knew we would become completely obsessed with. That changed sometime (ugh I can’t remember if I took the test in September or October- I want to say October as I was only 7 weeks when I miscarried?) as I stared at positive pregnancy test! We weren’t actively trying however we weren’t really preventing either. Either way we were ecstatic! I tried to be the wife that told him in a cute way but my face literally tells everything so he knew the moment he walked in from work something was up because I was grinning from ear to ear!! We laughed and hugged and were just so excited, as I imagine most people are when they find out that their love had created something so beautiful.

We made our Dr. appointment to confirm the pregnancy and everything looked good (as far as we knew), they told us we were very early in the pregnancy and to come back in a couple of weeks for another check up. While we were there, we asked the doctor if it was safe for us to fly, as we had just booked a flight to Washington DC as part of a one day deal Jetblue was doing (so spontaneous we felt). He assured us it was fine and on October 31st we were off on a one day adventure! The flight was great, DC was chilly and beautiful, but we did A LOT of walking. I remember I started to feel sharp pains, like that of a very bad period. We found ourselves occupying a lot of empty park benches while people-watching just to give my body a rest and take in the views. We flew home that night, everything still fine until the next day. We had just got home from a friends gender reveal when I noticed some spotting. I had read that was normal however I started to panic. I called the doctor and they said that as long as I wasn’t filling a pad I shouldn’t worry. I worked at a preschool at the time so I was on my feet all day, the spotting became more frequent and in the back of my mind I knew what was happening but held on to hope that my baby was fine.

It’s the night of November 3rd, I’m laying in bed and I felt like I was leaking. I got up to go to the bathroom thinking I needed to pee and I really just don’t even know how to describe what happened next. I sat down and all at once, it just happened. Effortlessly leaving my body. I was shaking, I had never seen so much blood in my entire life. Crying hysterically, trying to make sense of what just happened. I call for Will and he comes in completely white in the face; I just want my mom at this point but I couldn’t reach her. I put on layers of pads and head to the hospital. It was there that they confirmed we had lose our sweet little angel. I remember them making me leave Will in the waiting room and I just felt so terrible for him sitting there alone and helpless. The days that followed I feel like we did what most people do, spent some time to ourselves, cried and just let it all out.

Words from my husband Will on one of the hardest nights of our lives.

“The miscarriage was hard. Very hard. I was mourning the loss of a baby I already loved, and seeing my wife hurt more than I could ever imagine. All while feeling and trying to be the rock to hold us together. I saw how you changed, I felt different and more nervous at the thought of becoming a parent. I questioned my faith. I felt scared to try again and maybe this was a sign I wasn’t ready to become a father. But I knew at the end of the day we had each other and we would get through the tough days together.”

The support system from friends was amazing. My friend Ashley, bless her, brought me the most beautiful keychain with what would have been the babies birthstone, some angel wings and a little saying. She also sent me a song and just prayed for me and over me, I’ll never forget that kind of support.

The idea of trying right away after going through that was so far away from my mind that when people suggested it I thought how dare you. I wanted both my body and mind to heal. Also, when people tell you it happens to a lot of women, I understand that but can we be real when we say NO ONE wants to hear that? Ugh. Anyway, in March we found out we were expecting again! Not only that but after confirming with a new doctor, our due date just so happened to be the same date I miscarried. At first I thought what a cruel joke but the more I thought about it I truly just felt God’s grace. He knew the pain we had felt and wanted us to know He NEVER left us and had our baby right there next to him. Cooper James ended up making his appearance on October 24th 2016. He was the most perfect 8.7 pound little boy I had ever laid eyes on. My pregnancy was amazing and birthing him was not as terrifying as I imagined (God bless epidurals!). He is everything I ever could’ve dreamed of, I feel so incredibly blessed that God has chosen me to be his mommy. His smile is infectious and his laugh contagious. He is so sugary sweet it’s hard not to eat him up! He teaches me something new everyday and I just feel so privileged to watch him grow! I’m thankful for the obstacles that got me to where we are. I’m a stronger mama because of it. 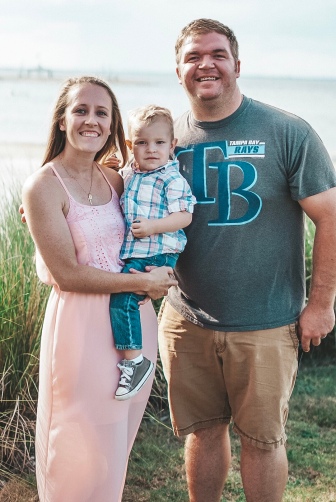